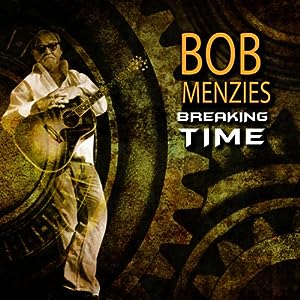 In the sixties and into the early seventies, the travelling life of a vagabond was a dream shared by many baby boomers. Now based in Toronto, Bob Menzies actually lived that dream, making his way around the world by thumb, boxcar, and freighter. He worked in Sudbury’s nickel mines and alongside migrant pickers in the fields of California. He’s been to Morocco, Norway, Greece and France, and lived and worked in Germany and England, all during a turbulent time when music genuinely had the power, if not to change the world, then at least to profoundly influence the people in it.

That experience imbues Menzies’ songwriting with a rare generosity of spirit tempered with the kind of worldly wisdom that can neither be bought nor faked. And then there’s the voice – utterly free of artifice or affectation, it’s as sturdy and honest as a well-worn pair of work boots, the kind of voice that seems to tell its own stories of life and love, quite apart from the song at hand.

Breaking Time is Menzies’ debut release, recorded at a time of life when most have long since stopped chasing youthful dreams. It’s a remarkable collection of folk-rock gems, some anthemic, some quietly affecting, but all delivered with unwavering passion and unquestionable commitment.

Menzies has a knack for strong hooks and infectious choruses, the kind that make songs seem like old friends even on the first listen. Lyrically, he’s concerned the passing of time and the things that truly matter when we face that fact that our own is finite. He doesn’t pretend to have all the answers – opener “Hey Now Joe,” for all its sing-along likability, questions what comes next once the final curtain falls, while “Happy Birthday My Friend” proves a posthumous, bittersweet rumination on the loss of those we love.

Elsewhere there’s “I’m Gonna Love You Anyhow,” subtitled “The Sailor Song,” a declaration of enduring devotion in spite of all, while “River Moon” gazes into the abyss and wonders whether it’s all worth it. “Crazy Town” is an autobiographical yarn about Menzies’ time working underground, and “Bitter Wind” is an elliptical and angry rant regarding the general state of the world, bristling with rage yet, in the end, indomitably optimistic that somehow we’ll find our way. “When This Day Is Done” and “The Day You Said Goodbye” are melancholic reflections on love, the former steadfast and true and the latter lost and longed for.

Although he’s done just about everything else, Menzies has limited experience as a performing musician, so he hired some of Toronto’s best to help flesh out his songs. Producer Mark Nakamura works wonders with the overall sound, warm and organic. With compositions evolving as the sessions progressed, contributions from guitarist Russell Gray and keyboard master Martin Alex Aucoin (piano, Wurlitzer, and organ) are particularly invaluable. Both contribute instrumental shades and textures that provide unobtrusive support yet render rich and fully realized arrangements.

It’s the vocals that carry songs like these, though, and Menzies’ homespun delivery and slightly ragged but transparently true voice is just right. Resilient even in the face of doubt and despair, there’s a genuinely heartfelt sincerity in every word he sings, leaving no question whatsoever that he has indeed lived and not just learned each song.

With songwriting reminiscent of the likes of Dylan and Hiatt, excellent sound, superb musicianship, and an engagingly warm and winning personality, Breaking Time is a collection well worth spending time with!

JAIMIE VERNON: THE STUDENT BECOMES THE TEACHER   March 23, 2013
Meanwhile, there are still artists who are heaving into their twilight with as much grace as they can muster in a world obsessed with youth and yoga pants. This week I received a great new CD from Bob Menziesof Toronto. I must admit that I didn’t know what to expect from a guy who has been a world traveler doing the work of Everyman and finally settling down in his prime to produce a fantastic debut album nearly a year in the production – but a lifetime in the writing.

Generally, I don’t go much for Dylanesque artists, but Bob (Menzies) has shaken me out of my dislike for the Mumbling One by not only articulating with a strong and confident voice, but writing songs that are relatable and accessible to any listener.  Menzies also delivers the tunes with a slight country edge as slide guitars permeate many tracks. The disc is heartfelt and stand-out tracks include “Hey Now Joe” https://www.youtube.com/watch?v=x1QAZa4lNcU, “Bitter Wind” (which should be sent to radio pronto!), “Crazy Town” (about Menzies’ experience working in a mine), and “Happy Birthday My Friend”. Bonus points for including his biography in the CD booklet itself and great production by Studio 92 guru Mark Nakamura and Brett MacMillan.

Jaimie’s column appears every Saturday.
Contact us at dbawis@rogers.com

Jaimie “Captain CanCon” Vernon has been president of the on again/off-again Bullseye Records of Canada since 1985. He wrote and published Great White Noise magazine in the ‘90s, has been a musician for 35 years, and recently discovered he’s been happily married for 17 of those years. He is also the author of the Canadian Pop Music Encyclopedia and a collection of his most popular ‘Don’t Believe A Word I Say’ columns called ‘Life’s A Canadian…BLOG’ both of which are available at Amazon.com or http://www.bullseyecanada.com